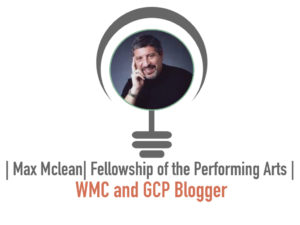 Max McLean is the founder and artistic director of Fellowship for Performing Arts, a New York City-based theatrical producer. Committed to engaging diverse audiences with theatre from a Christian worldview, FPA produced the nationwide hit The Screwtape Letters; C.S. Lewis’ The Great Divorce, now on national tour; and the award-winning Mark’s Gospel.

In a career spanning 30 years, Max has produced, directed, adapted and starred in productions off-Broadway, at Scotland’s Edinburgh Fringe Theater Festival, the Pegasus Theater in Chicago, the Dallas Theater Center and the Stratford Festival Theater, as well as at dozens of colleges and performing arts venues across the country.

As narrator of the Listener’s Bible, McLean committed to recapturing the early oral tradition of telling the Bible story with clarity and power. His Bible recordings have twice been nominated for Best Inspirational Audio by the Audio Publisher’s Association.