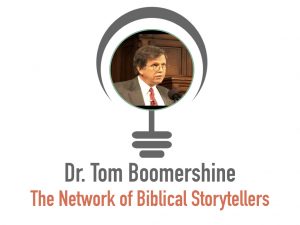 Rev. Dr. Thomas E. Boomershine is an internationally known speaker and author in the interpretation of the narratives of the Bible as oral story in antiquity and in the communication systems of the digital age. He served as the G. Ernest Thomas Distinguished Professor of Christianity and Communication at United Theological Seminary in Dayton, Ohio from 2004-2006 where he also served as Professor of New Testament from 1979-2000. He now writes and produces multimedia resources for the interpretation of the Bible in digital culture.

From 2000-2004, Tom served as Dean of the Lumicon Institute and Vice-President of Lumicon Digital Productions, a division of UMR Communications in Dallas, Texas. At Lumicon he led a team that established the first comprehensive program for the education of clergy and laity in digital culture ministry and produced an integrated series of oral, written, and digital resources for the full three-year cycle of the lectionary.

A leader in the rediscovery of the Gospel as story, his dissertation at Union Theological Seminary, “Mark the Storyteller,” was the first systematic study of the Gospel narratives as story. As part of his research and ministry, he began telling the Gospel of Mark in the early ‘70’s.  Tom’s book, Story Journey: An Invitation to the Gospel as Storytelling, is published by Abingdon Press. In 2004 he organized the NBS Seminar, a group of biblical scholars and biblical storytellers, that is exploring the implications of biblical storytelling for biblical scholarship.

Tom served as Chief Consultant for Multimedia Translations for the American Bible Society (1989-1993). He was an Executive Producer for the award-winning ABS video/multimedia program “Out of the Tombs”, an audiovisual translation of Mark’s story of the Gerasene demoniac. Tom has been on-camera talent for three segments of the “Disciple” Bible study series of the United Methodist Board of Discipleship.

Dr. Boomershine is a member of the Society of Biblical Literature and was the founder (1982) and past chair (1982-89) of the Bible in Ancient and Modern Media group.  He has received major grants from the Lilly Endowment for research in the media history of Christianity and has participated in several international research conferences on Christianity and communications.  He has published a range of articles on the Gospels as story, the intersection of biblical studies and communication, the church in digital culture, and digital biblical hermeneutics.

While serving inner-city multi-ethnic parishes in New York and Chicago, Tom lived in the heart of the civil rights struggle of the 1960’s. During his tenure as Professor of Biblical Studies at New York Theological Seminary (1972-79), he had an integral role in the development of the Certificate, STM, and DMin programs for African-American, Hispanic and Korean pastors in the New York metropolitan area.