Highways to Zion in Your Heart

Home » Devotional » Highways to Zion in Your Heart 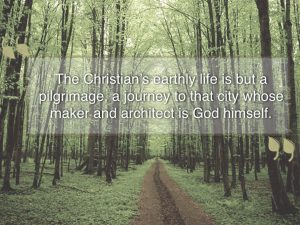 One of the sacred actions of Christian worship is pilgrimage. The word “pilgrimage” may be defined as “journey made to a sacred place as an act of devotion.” The practice of pilgrimage may be traced to one of the theological emphases derived from the idea of “sacred place” connected to Hebrew worship in the Old Testament. The pilgrimage was a part of Israel’s religious life from the very beginning, attested by the patriarchal journeys to sites like Bethel. Such places were associated with theophany, appearances of God accompanied by divine revelation (Gen 12:8; 31:13; 35:18). Another of these sites was Shiloh, where the Ark of the Covenant resided (Judg 21:19). The story of Elkanah and Hannah indicates that devout Hebrews made annual pilgrimages there for the covenant feast (1 Sam 1:3).  Later, the three festival pilgrimages legislated by the Mosaic covenant became a fixed element of the Hebrew religious calendar (i.e., Unleavened Bread and Passover, Weeks or Pentecost, and Tabernacles or Booths, Exod 23:14-17).

Journeying to sacred places by God’s faithful people was not limited to the Hebrew religion of Old Testament times. By the second century A.D., Christian pilgrimages to the Holy Land were popular. Retracing Jesus’ movements during his last week of life of earth (his Passion Week) by walking the Via Dolorosa in Jerusalem became especially significant. Eventually, travels to the graves of martyrs and saints, sites where miracles had been performed, and other holy cities (e.g., Rome, Canterbury) were added to the Christian tradition of pilgrimage.

Despite the views of prominent critics over the centuries of church history (e.g., John Chrysostom, Jerome, Erasmus), pilgrimages to the Holy Land and elsewhere remained, and still are, an important feature of personal spiritual in many Christian traditions. Alternatives to these treks to specific sacred sites of Christianity have gained in popularity recently. These so-called pilgrimages may include a walk through the re-creation of the Bethlehem advent scene or the stations of the Way of Cross during the Easter season. The more liturgical Christian traditions view the worship processional as a reenactment of the pilgrimage to the Temple on Mount Zion. Some Christians understand their weekly journey to their local church as a type of pilgrimage. In other instances, travels to local church reunions and anniversaries, baby dedications, or baptisms, or revisiting the place of one’s Christian conversion or baptism prompts the same reflection and spiritual renewal associated with the more traditional pilgrimage experience.

As an act of worship, the pilgrimage was intended to be an event of great joy and celebration in homage to the living God (Ps 122:1-2). After the time of David, the pilgrimage to Jerusalem became an important symbol of the unity and solidarity of the Hebrew tribes (Ps. 122:3-5). The pilgrimage also afforded the occasion to teach a new generation of Israelites about the holiness of the LORD and the demands of covenant relationship with him (Pss. 15; 24:3-6; Isa 33:14-16). By revisiting and recalling the manifestation of God in specific places, his people anticipate future and more profound divine encounters—God may indeed show up in these places again! The recollection of and participation in pilgrimages to God’s holy mountain was also an opportunity to renew faith in the midst of distress (Ps. 42:4) and vindicate the cause of the righteous (Ps 43:1, 3-4).

More important to the New Testament writers is the equation of the Christian life with the pilgrimage of the Hebrew tradition. Even as Jacob considered his life a “sojourn” of 130 years (Gen 47:9), so the life of Christian faith is a pilgrimage to the heavenly country (Heb 11:13-16). For this reason, the New Testament refers to Christians as “foreigners and exiles” (1 Pet 2:11, NIV), whose citizenship is in heaven (Phil 3:20). The psalmist had a similar understanding of the life of faith when he blessed all those who go from “strength to strength” as they set their hearts on pilgrimage (Ps 84:5, 7). Literally in the celebration of the Hebrew festivals at the Temple in Jerusalem, and metaphorically by embracing the hardships of daily living in the strength God provides (Ps 84:6,11-12). Likewise, the Christian’s earthly life is but a pilgrimage, a journey to that city whose maker and architect is God himself (Heb 11:10).