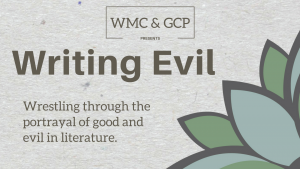 Whenever I introduce myself as an author, especially to someone who knows I’m a Christian, the question inevitably comes up, “So do you write cheesy Christian fiction? Or do you write normal stuff?” Unless the person is beautifully blunt, the question won’t be this direct, but it’s implied. And it always punches me in the gut.

But I know exactly what they mean. Growing up, I was only allowed to read Christian fiction or classics. With Christian fiction, my books of choice were historical fiction. While these books were easy to read and often taught me something interesting about a point in history, they left me feeling flat and often depressed. In many of these novels, there were two types of characters: those who were either super holy (with the devotional habits of a saint) or irredeemably evil.

I couldn’t identify with either set of characters. I was a normal teenager—a mix of the good, the bad and the ugly.

When I left home, I discovered a new genre of books. Ones that had been banned from my childhood and adolescent library. Edgy stuff that rolled in the mud of humanity. These books didn’t deny the evil that the Christian fiction had so carefully skirted over; they embraced it with reckless abandon.

These novels depressed me too, but in a different way. They gloried so much in the brokenness of the world that I wondered if there was any point in trying to live like my choices mattered. All my best efforts at choosing the good, noble and pure were probably doomed. Rather than the cotton candy Christian fiction, these books were like an overwhelmingly rich dessert. Binging on them left me lethargic and with a stomach ache.

In wrestling with this conundrum, I have realized the key element that gives each of these genres their feel is due to the way they approach the dark, broken parts of humanity. The cotton candy versions pretend the darkness isn’t real or that it’s easily avoidable if you’re a good person. The edgy stuff suggests that brokenness is all there is, so you might as well embrace the darkness and let the chips fall where they may.

Is it possible to find a book that addresses evil but does not glory in it?

Yes. Often they become classics, and I think this is no coincidence.

Take Jane Eyre, one of my all-time favorite books. When reading this book as a tween, the evil of the Lowood Institution and Mr. Brocklehurst must have gone over my head. As an adult, I have been shocked when rereading this section—Bronte does not pull any punches in this portrayal of Jane’s childhood and indictment of charitable institutions during her time.The death of Helen shows that bad things do happen to good people. Innocent children, in fact.

Another favorite of mine as a child, A Wrinkle in Time by Madeleine L’Engle does not deny that very real evils exist in our world. Both children and adults face the ramifications of tragedy. Meg, Charles Wallace and Calvin must confront various worlds caught up in the universal battle of good versus evil. Some worlds succumb to the darkness and suffer eternal loss because of this defeat.

One of my favorite modern writers, Dean Koontz, often grapples with characters so dark, I have to read them in one setting; otherwise there’s no chance of me falling asleep at night.

How do these and other iconic authors make grappling with darkness realistically satisfying and, at the same time, inspiring and hopeful?

First, I believe they never give in to the easy, lazy philosophical cop-out that most darkness is either a problem of perspective or a “blessing in disguise.” In an interview on reason.com, author Dean Koontz says,

But in acknowledging the very real presence of sin in our fallen world, these authors do not use it to titillate their audience. The evil in their books is not some forbidden pleasure that feeds dark urges. Instead, it is distilled down to its essence: something that creates dysfunction in relationship to God, others, or the world around us. As Madeleine L’Engle says in A Circle of Quiet,

… [good authors] prepare [children] for the rough world outside the nest. Hans Christian Anderson lets the little match girl die. The Red Queen is pretty rough with Alice, and Lewis Carroll makes no bones about the fact that the sweet little oysters end up by getting eaten. I do not take evil lightly, or think that it’s unimportant and can be coped with easily.²

In my latest book Valley of the Broken I deal with some very dark themes: child abuse, genocide, generational sins. These components of evil eat at my heart. I first saw them while serving as a missionary from 2000-2007 in Kosovo, post-Yugoslav War. I then discovered them back home in America, as I dug into the Southwest’s history, read the local newspapers, or helped in my children’s classrooms and heard whispers of other student’s dark and lonely journeys.

So what do I do in the face of these very real evils? Attempt to negate these people’s suffering by pretending it does not exist? Cheapen or trivialize their experience by pretending that darkness can also be beautiful or exciting?

I have to balance on a tightrope of acknowledging but not glamorizing evil. Each time I write a scene that deals with sin, I must carefully weigh each word I write by these two boundaries. If I stray into either territory, I destroy hope and the eternal truth that Jesus died for: in the perfect LOVE of our Creator and Savior there is no fear, no darkness.

Instead, my dealing with darkness must show there is forgiveness no matter the sin, redemption no matter the depth of despair, and a love that longs to bring us back into the eternal community and communion for which we were created.

Join Kelly Baugh and 150 other presenters from over 70 countries in a global conference on creativity, Make Jesus Culture. You can learn how your work can be a part of our movement of scriptural and worship centered creativity and innovation, visit www.thegardencityproject.com. Kelly’ book, Valley of the Broken is available in paperback and Kindle.