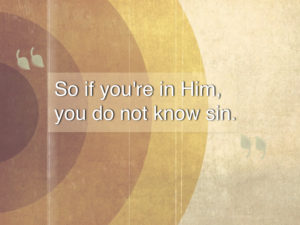 Each sin breaks a law, each one sinning breaks

Yet He was revealed to kidnap our sin

And if there is sin, it isn’t in Him.

So if you’re in Him, you do not know sin

And if you’re in sin, you do not know Him

You have not seen Him, nor shown Him.