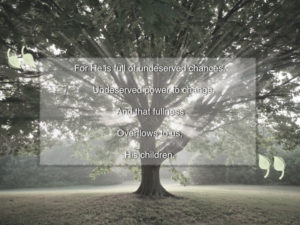 The Word’s how it all began.

The Word will come, for the Word is what he is.

He was God & with God before it began.

All of it was made through him.

Nothing, seen or unseen, came about without him, for in the Word was life.

Deep within him life sourced forth to radiate into the world as glorious light.

And Darkness cannot stand, nor sway, nor conquer it.

But God sends His conquerors.

He came, sworn by God, to tell the whole truth

Nothing but the light, so through illumination the nations might overcome.

John’s not light, he’s a witness on the stand, a pawn in our King’s hand.

He was in the cosmos. Though

He, being the source, made it all, none of it noticed

Him.  None of it called

He thought of his own people constantly, but consistently they left

They opened arms, opened hearts, & welcomed their Word, praying to him.

To Receivers He gave a birthright, an identity, that none could take away.

They are Children of God.

They’re not Children of men.

Nor came they from choice and

No Husband or wife has control of this for

They are born of God himself.

The Word came as flesh,

Erecting His tent amidst our camp,

Despite our minuscule, minor shelters.

Gravity drew us into him,

For all orbited his tent.

His is a weight we can see, for he,

He is the one, the only one, the holy one coming from our Father,

of we, His children.

His weight is truth.

His weight is grace.

For He is full of undeserved chances.