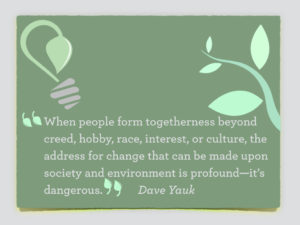 We have inherited a Western idea of spirituality that has trickled down into our worship.  “The spirituality we inherited, for all the richness and holiness it bred, is essentially for the individual. This spirituality puts the full responsibility for the search for God and for holiness on the person, though he or she is expected to need direction, and probably the structure of a life specifically designed to support spiritual search.  The goal of human life is perceived as personal salvation and if possible holiness, so that every the traditional and energetic Christian commitment to the service of people in need is interpreted as a means to holiness of the person who serves.”1  This quote helps to evaluate whether spirituality is individual in its formation or if it is somehow in need of others; regardless of the answer we arrive at, individual or corporate or both, our spirituality will be dangerous either way.

Walter Downey, in his book Understanding Christian Spirituality, puts together some very good ideas that can help give us some good answers in how we worship God and love others.  Paraphrasing Downey, he states that Spirituality is “a true self, within a relational community matrix; creating a just and social order toward ecological consciousness; which has a reciprocal relationship between prayer and action.”2

Downey’s progression is awesome!  To be truly “human,” a person has to not only know who they are, but also has to define themselves in community.  This is because we are made in the image of a Triune God. “The Trinity is a communion of loving persons in loving relationship, and it is important to see human relationships as a locus for the encounter of God.”3  Therefore, for anything “to be, it needs to be itself (hypostasis) and be in relation to something else (ekstasis).”4  This explains why I can’t just say “I am Dave” to completely define myself. I am also in relationship to other people and other things—“I am a…brother, husband, father, educator, student, a human (as opposed to a rock), etc.” This is the profound mystery that is in the Trinity itself: it is a “communion (koinonia) which expresses the inherent diversity yet equality and interdependence of the Father, Son, and Spirit.”5  Our spirituality has to recognize our individual identity and has to realize we can’t “be” without “another.” As Os Guinness would suggest, this is humbling to recognize.  To believe only in individualized identity and spirituality is to believe a lie that births pride and envy and strangles our search for unity!  Only humility, as we serve creature and cosmos, can bring about such a community identity!

This means that one cannot cut himself or herself off from God (the source) or the context (the church and creation) to cultivate a true self—a true offering of worship—a true spirituality.  Only in following God, as experienced within the church and extended toward the world, can such a formation take place.  There’s nothing like it!  And in church, when people form togetherness beyond creed, hobby, race, interest, or culture, the address for change that can be made to society and environment is profound—it’s dangerous.  It produces a profound centripetal force (toward the center) which results in communion, a prayer, and a depth that moves in centrifugal (from the center) motion outward like a ripple in a pond becoming a tidal wave.

However, without being grounded in Jesus’ gospel, communal and individual worship and spirituality can also be equally as dangerous.  Inventing our own form of godliness never ends well.  Walter Principe, I believe, completes Downey’s idea when he maintains that spirituality is a “formulation of a teaching about the lived reality, often under the influence of some outstanding spiritual person.”6  Whereas Downey really helps us understand that we are a spiritual person amidst a spiritual people, to a world in need of our sprit-filled attention Principe says that we must first be motivated by a teaching.  Our teaching can’t be the doctrine of Green Peace, Subway, Global Warming, Obamacare, the Republican Party, Frat Party, or any other party.  Everyone is trying to form us by his or her information, marketing scheme, and agenda.  However, only the gospel of Jesus can ultimately form us into a God-glorifying people.

How do we become aware of such an agenda?  The Scripture, of course!  We are to care about who we are, who they are, and what the creation is, but we can only arrive at the right answers to our definitions if the Bible forms our worldview.  This is true worship, true spirituality!

I feel a rap coming on to sum up my point (don’t ask me why a rap popped into my head):

If spiritual I’m to be, it’s to know my “I” within a biblically formed we, formed in the image of the Trinity; concerned for them and they—whomever them and they may be—living within a world, a thing, which needs a redeemed people’s spirit-filled care; led by spirit-filled prayer, participating in the Kingdom of a God which is everywhere.