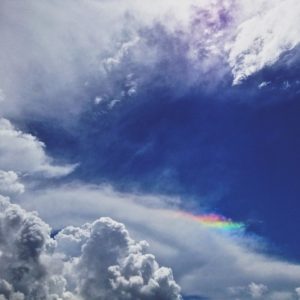 Alpha,
the first.
Before there was,
He was.
Uncreated,
infinite,
without beginning or end,
outside of time and space,
limitless and without constraint.

He began His work:

He stretched out the heavens
and sculpted the earth,
giving form to the matter
and shape to His works.
Light and darkness,
night and day,
the parameters of the universe He set in place.

The vault between the waters,
the expanse
separating the heavens above
and the earth below.

The waters He gathered together
seas allocated their domain,
dry ground appeared,
land He seized.
Vegetation sprung forth
plants and trees,
bearing seeds and fruit
according to their kinds.

Stars flung into space
all called forth by name,
markers and signs for sacred times.
Two lights he formed,
the greater light
and the lesser light,
governors of the day and night,
stewards of the seasons.

He populated the oceans
and they teemed with life,
sea creatures great and small
roaming the depths.
Birds to occupy the vault
the heights of our world,
soaring through the skies
exploring the expanse.

Life to inhabit the land,
wild animals and livestock,
creatures that move along the ground,
then from the ground
the last of the Alpha’s works,
Omega.
Unique,
different to the others:
image bearers,
authority carriers,
chosen rulers.

He rested from His work.

Omega:
placed in a garden,
commissioned to be fruitful,
increase in number,
populate the earth,
subdue it,
master it,
bring order to chaos,
extend the boundaries of rule,
all out of relationship
with Alpha.