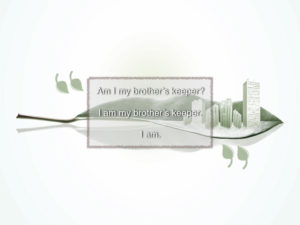 Long ago there lived two brothers

One kept flocks, the other worked the soil

Both brought portions to their maker

The younger had fat firstborn, the older spoil.

Their Lord smiled upon the younger

But grimaced and barely looked at the other’s gift

That one, face downcast, soon burned with anger

His Lord’s reply was “Do right, master sin.”

Soon the older approached the younger

Inviting his brother to join him in his field

And as they were in the field with only each other

The older soon left red-handed from the man he killed.

His Lord approached him asking, “where’s your brother?”

The older knew sin had mastered him in his zeal

He said, “I don’t know” and thought of the sin of his mother

Though Abel’s blood cries out from Caine’s cane field

And though Cain himself wandered cursed & dying

We all tune out our neighbor’s candid crying

To run away red-handed from the brothers we kill

For ten-thousand years our maker hears the question

He answers “Of course your brother needs you, keep him well”

Am I my brother’s keeper?

I am my brother’s keeper.