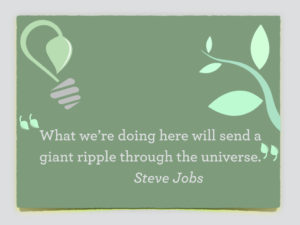 It is no secret that the iPhone is a wild success, and with the launch of the iPhone 6 series, I’m sure Apple will not be slowing down in their influence any time soon.  In this post, I will not be making an attempt to slander Apple—ha, I’m writing this post on my MacBook Air, Tweeting it with my iPhone, and it’s stored in my iCloud, so it’s no secret that I love Apple products—but I want to think theologically for a second.

All of life is doxological response, and everything to which we put our hands reflects our beliefs.  Apple is no different.  Whatever we deem to be the most praiseworthy “thing,” we will sacrifice for it ($299 bucks and a prison sentence cell phone plan for 2 years), we will be shaped by it, formed by it, and we can ultimately end up reflecting on what it has to teach us.  The iPhone, like any created thing can be good, but its creation is driven by the theological principles and beliefs of the one making it.  Apple continues to use language in its invention that I believe causes detrimental shifts in our culture and the way we behave, and I think understanding Apple’s theology is important.

Apple is theologically shaped, and they are shaping culture into their image.

I have a problem, and Apple can become my cocaine of choice.  I’m addicted to ideas.  I love to create fantastical dreams in my head of imaginary visions and future conquests. Why not?  It’s like a video game!  It makes me feel bigger than I am; it “super-heroizes” me into a victor.

Vision and ideas can be helpful, because they help us imagine things that are beyond us; but, if our hope is anchored solely in these things, these lesser pleasures, it can be the end of us.  What if our dream or idea doesn’t pan out?  However, in scripture we’ve been promised a hope that is sure and dependable.  Hebrews 6:19 says, “We have this as a sure and steadfast anchor of the soul, a hope that enters into the inner place behind the curtain…”  What this verse promises is that Christians are able to apprehend the kingdom of God in the NOW through Jesus who has torn the veil to heaven, but there is more to come when Jesus fully brings us into his prepared place in the NOT YET.  We await an ideal, a utopia, a preferred future that Jesus promises is coming!  His promise is not breakable or fleeting, but sure.

Apple plays off humanity’s need to imagine ideals and to think of things beyond their pay grade.  They paint a future that is bright, expanding, and a kingdom that is to be hoped for.  I watch the Apple KeyNote talks as the salivating crowd perches on the edge of their seats to await their future.  Let’s remember that our future is filled with Jesus—a much bigger presence than Apple.

Worship the significance in our story

Apple’s big push is story and narrative. Their brand capitalizes on the fact that they can connect the world’s story cohesively through individuals, harvesting everyone’s creativity to be shared in a vast network that can ultimately give human innovation purpose, platform, and community.  The idea of story is good, but we must remember who the central character is.  In any good story, there exists a main character.  If the author fails to establish that character, the story falls flat.  This is why the Bible is written in story and narrative.  God wanted to tell a story that is full of tension, climax, denouement, turning points, and plot twists.  God created us for story and the story of the Bible reflects this.

However, in Jesus’ time, the religious leaders of the day got the story all wrong as well.  So much so, that when Jesus came along, the disciples thought that Jesus was going to be a political King and that they were going to be his henchmen.  They, unfortunately, had read the story of scripture wrong and thought that it was about them, their superiority, and their perfect observance of the law.  In Luke 24:27, after Jesus rises from the dead, we are told that the disciples were still profoundly confused about who Jesus was, what the Old Testament was for, and who they were supposed to be, and it tells us that this is what Jesus did: “And beginning with Moses and all the Prophets, he interpreted to them in all the Scriptures the things concerning himself.”

That’s right, the story of Scripture was, is, and always will be about Jesus, and without knowing the main character, the whole interpretation of God’s work is off balance.  How much more so is a world that sees through Apple glasses and believes that our story is the supreme contribution to the universe?  It seems that before we create our story we better get to know the main character of whose story we’re in.  Jesus gets to decide what is beneficial to his narrative, not us, and certainly not Apple!

Apple technology continues to define, shape, and craft character and belief.  It shapes us as people, and it forms our belief of what a “god” should be.  Let’s ponder the apps for just a moment.  If you touch an app, you expect it to move at warp speed, right?  If it doesn’t connect you to what you want faster, more efficiently, and with greater ease than it did in its previous version, then you, and I for that matter, throw a tantrum.  We yell when the internet takes .5 seconds to load, we pay $1000 more just to up our storage drives and memory for faster connection and delivery, and we expect the iPhone, in conjunction with Google search, to connect us to what we need, when we need it—right now!!!

This shapes our character.  What about the Bible’s talk on patience, forbearance, long-suffering, steadfastness, and slowness?  One of the fruits of the Spirit is patience, and Apple seems to be convincing us that this is not a virtue, but a vice.

This shapes our relationship and belief about the character of God as well.  When we pray, we think He should react on our terms as fast as our app does.  When we need direction, we expect Him to move heaven and earth and to sovereignly Google all the answers right before our eyes—as if we expect Him to literally write His answer across the glassy sky.  The theology of all technology is un-shaping Christian character and shaping our view of what “god” should be like.  Theological and scriptural grounding is necessary to be able to use these techie tools to our advantage and not to our detriment.

If you’re around Apple for five minutes, you’ll hear a stream of catch phrases, jargon, and pitches that are all outlined by the word “beauty.”  It’s no secret that Steve Jobs had taste, and his stroke of genius is not merely in the invention of the products, but in his ability to make them “cool.”  I will forever affirm Steve Jobs’ biblical desire for excellence.

However, Apple has dumbed beauty down to how something looks and feels, and it has forever made the word “beautiful” into something that is physical.  They capitalize on the portrayal by others, like Playboy, sleazy sitcoms, and others, who depict men and women only as important if they are “physically” beautiful.  What about Jesus’ affirmation of the pitiful display of the women anointing him with oil, as he says in Matthew 26:10, “she has done a beautiful thing to me.”  What about Jesus’ condemnation of the Pharisees who were “like whitewashed tombs, which outwardly appear beautiful, but within are full of dead people’s bones and all uncleanness.”  What about Peter’s insistence that true beauty was not in outward adornment, but in inward quietness and class?

I’m not saying that Apple does not make good products, but can they hijack a term like beauty and redefine it in a way that God would not?

Apple Watch at a glance … not a gaze

The Apple watch plays off the misuse of the term beauty, and its catch phrase is “beauty at a glance.”  This is Apple’s quick look at its new watch. It wants to create a personalized world at a glance.  But what’s the difference between a glance and a gaze?  In Psalm 24:7, David longs to do nothing else but “gaze” upon the beauty of the Lord.  In a glance, one can only grab what one wants, but in a gaze one contemplates the beauty, the perfection, and the extravagance of another.

With the rise of the Apple Watch, Apple is redefining personalized, and making “personal,” about what we get from an object rather than the beauty of the object itself.  This is theologically cancerous! No more is true beauty and creation to be contemplated and gazed upon in appreciation, delight, with the sole desire of enjoying the object of our affections—which produces love—but now only beauty and love can be obtained in our timeframe, on our clock (literally), and as quickly as we say.  This is perfect for a friends-with-benefits culture, wouldn’t you say?

Apple Watch is the “most personal device we’ve ever created,” says Cook.

As stated above in brevity, now getting to know someone should be as personalized, quick, and nifty as the watch itself.  How will this affect how we love others?  I mean, Facebook has already turned friendship into a number, Twitter has already turned poetry into a hashtag…Is Apple now turning knowing someone into jewelry?  Are “persons” now only for display, like a man carrying a hot blonde as a trophy to affirm his masculinity and fame?  We must think long and hard about the words we are using to describe things.  Apple is creating good things, using good language, and attaching them to each other in all the wrong ways.  I shudder at the day when to know someone is to become so depersonalized.

“Apple is creating good things, using good language, and attaching them to each other in all the wrong ways.”