Learn Unto Him A New Song

Home » Featured » Learn Unto Him A New Song

I was recently asked to be a guest worship leader for a service I didn’t plan. This was really weird for me, because for the past fifteen years or so, I’ve chosen essentially all of the music that I’ve sung in church. So when the church that was hosting me handed me four songs that I’d never sung (three of which I’d never even heard), I walked right into a whole new world.

Normally, I learn a song inside and out before I even consider adding it to my rotation. But having four new songs to learn inside a two week span? That’s just nutty. 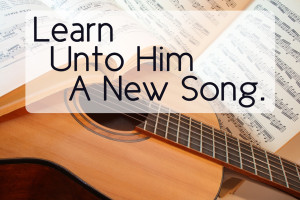 But I’m always up for a challenge, so I went for it. Here are four things that helped me pull off four new songs.

1) iTunes on repeat all day
My day job is database administration, which is exactly as interesting as it sounds. Thankfully, I have a good pair of headphones, so I spend most of every day listening to music. Step one of my strategy was to create a playlist with just those four songs – in the arrangements that we would be using – and put it on repeat. All day. Every day. Even while composing database queries, running reports, and analyzing data, those songs were working their way into my brain. Do whatever you can to allow the songs to work their way into your subconsciousness.

2) Sing it in the car
In all honesty, the car is not an essential element in this step. But I have kids and a busy schedule at home, so it’s not always easy to carve out time to work on learning new music at home. I have a twenty minute commute to work, which turns out to be just about perfect for a four song set. In the car, I could sing along at the top of my lungs without interrupting anyone’s homework or television viewing, and it also made a great environment to hit a lot of wrong notes without fear of embarrassment. You need to have the freedom to get the songs wrong before you get them right.

3) Play it until you know it backward and forward
Once I’d buried the songs inside my brain and squawked out a lot of wrong notes, I started working on them with my guitar. At first, I relied heavily on the chord sheets on my iPad, but soon I was able to play them with just a few glances. I practiced every transition, every break, every note, until the chord changes and lyrics were second nature. You need to own the song before you can lead it.

4) Don’t be afraid to let go
So I was able to walk into the church that Sunday morning, fully prepared to lead the worship team in those four songs in those exact arrangements. Of course, I heard the six words I didn’t want to hear: “We don’t do it that way.” Each song had its own variations and tweaks that that worship team brought to it. But because I knew the songs so well by that point, making small adjustments on the fly was no problem at all. This is why it’s critical to learn the song, not just memorize the arrangement. Knowing a song inside and out gives you the freedom to change it up when you need to.