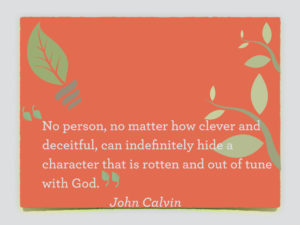 This sounds like a mouthful, but please allow me over the course of the next few months to explain what is meant by the wording in the above statement.  As we contemplate and think through what is truly beautiful innovation and creativity, we must turn to the book of Titus for consideration.  In Titus Chapter 1, Paul very intentionally compares two lifestyles together to make a point: the life of an elder and the life of a rebellious person.  He clearly explains that an exemplary Christian leader—one who oversees God’s flock—is to be blameless, faithful to one wife, patient, honest, hospitable, self-controlled, and the list goes on and on. A rebellious person, however, is recognized by their meaningless talk, their brutish lies, their laziness, overindulgence, and detestable disobedience.  Paul clearly states that these rebellious people claim to know God (theologically), but deny God by their actions.

This may seem like a pretty simple thing.  I mean, we all hate hypocrites right?—those who say one thing and do the opposite (I’m sure we’re all feeling guilty at this moment).  However, what Paul says next is surprising in what it teaches us about beauty.  In the following chapter Paul begins in the first ten verses like this:

“But as for you, teach what accords with sound doctrine. Older men are to be sober-minded, dignified, self-controlled, sound in faith, in love, and in steadfastness. Older women likewise are to be reverent in behavior, not slanderers or slaves to much wine. They are to teach what is good, and so train the young women to love their husbands and children, to be self-controlled, pure, working at home, kind, and submissive to their own husbands, that the word of God may not be reviled.  Likewise, urge the younger men to be self-controlled.  Show yourself in all respects to be a model of good works, and in your teaching show integrity, dignity, and sound speech that cannot be condemned, so that an opponent may be put to shame, having nothing evil to say about us.  Bondservants are to be submissive to their own masters in everything; they are to be well-pleasing, not argumentative, not pilfering, but showing all good faith, so that in everything they may adorn the doctrine of God our Savior.”

Observe carefully two things.  First, that the mention of sound doctrine is followed by Paul’s exhortation to man, woman, and child to maintain a height and standard of character (being).  This is the result of sound theology.  In promoting theology we need to keep our eyes on the fact that the goal of thinking rightly about God is to help us live rightly before God and man.  Second, we are to adorn or make beautiful the doctrines of God (doing).  The Doxology Project will aim at helping people to live rightly before people and God, and this includes honing our gifts, our craft, our art, and our ingenuity in order to decorate and make attractive all that we believe.

Paul links sound doctrine (orthodoxy) to what a man, woman, and child ought to be in sound character (orthopraxis).  Paul is not undervaluing sound theology here, but rather recognizing that everything we are and do comes from our theology.  Perverse belief leads to perverted being and action, and vice versa.  To conclude his train of thought, Paul makes one of the most beautiful statements in all of scripture by saying; “in everything…adorn the doctrine of God our Savior.”

The word adorn, κοσμέω (kosmeō), means to make something beautiful by cosmetically preparing or ornamenting it for a purpose of honor.  From this word we get the English word cosmetics, and it comes from the root word κόσμος (kosmos) where we get the word cosmos—referring to the whole of creation.  Matthew uses this word referring to a house that is put in order; Timothy uses it to refer to the inward beauty of a woman. John uses it to describe the Church (Bride) awaiting Jesus (the Bridegroom) at the end of the world, and he uses it to describe God’s prepared city and new kingdom.

Here, Paul is connecting us to powerful imagery of true beauty.  In a world where the word beautiful is thrown around and attached to things such as images, iPhones, and created things, we need to first recognize that true beauty is not first and foremost about the thing the artist creates or innovates, but it is primarily about the artist’s being—who they are!  Paul is trying to say that humans beautify things cosmetically in the same way God beautifies things in the cosmos.  As God’s creation is a beautiful portrayal of all that is in his mind regarding his nature, character, glory, and image, our creativity and doing pours out of whom we believe God to be. God defines beauty in creating a cosmos that reflects and points to Himself.  Our goal in doing and creating should be the same. Theological doctrine and thought without the accompaniment of a Christ-like character is like a Christmas tree without decorations.  The tree alone is beautiful, but once adorned with ornament, it becomes a brilliant icon of celebration and generosity.  He’s also saying that a life of incorrect doctrine is like trying to throw tinsel on a tree that isn’t there.  Being and Doing cannot be separated.

So, before calling something truly beautiful, we should think about a “thing,” an “idea,” a “sound,” a “venture” (whatever it may be) and ask first about the character of the one who made it.  Does their life reflect Godliness, and pay tribute to the God who created them?  If our answer to this question is not yes, can their creation truly be beautiful?