David Crowder – All This For A King – Essential Collection

Home » Headline » David Crowder – All This For A King – Essential Collection

The worship world was devastated when David Crowder let us all know that this would be the last album. But there is good news, he is not completely done.

Today the “Essential Collection” is being released, which you can purchase on iTunes.

Of course, on this album, you have all the favorites that many of us know and love. The songs we have led our congregations in for years and years now. Songs like: O Praise Him (All this for a King – the name of the album), Our Love is Loud, How He Loves, You Alone and Here is our King (which we just did on Sunday at our church). 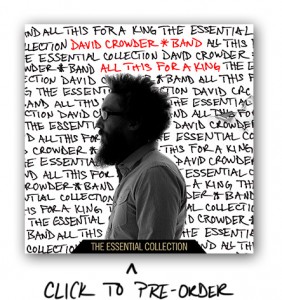 But, you’ll also find some of the songs that aren’t as familiar or as popularly sung like: The Glory of it All, SMS (Shine) and Shadows.

However, what I think is the best part is the new track. Yes, there is a new track: This I Know. It’s a great track. It’s in a style that you’ll love. At least if you’re diggin’ the revival of folk rock in music these days. Which, if you haven’t figured out, I love it. Which means I love Crowder’s new track. You’ll definitely want to pick that up.

Let me just say, if you’ve never given Crowder a chance, this is the perfect album for you. If you do, I think you’ll be surprised to find yourself worshipping along with many of the songs that you probably do at your church and may not have known were his.

There have been some who didn’t like Crowder, especially with all the electronic stuff added to his music which was pretty out of the norm for most of us. However, if you’ve paid much attention to what’s happened in Pop music over the past couple of years, electronic instruments have become a norm. In fact, we have really begun to hear a synthesis of synth and analog.

So, in that respect Crowder was ahead of his time. He is an artist in the truest since of the word. And if for no other reason, it’s worth checking out the artistic level of his songs.

And, to put a little more beef behind my words, we’re going to be doing another giveaway of the album. So, make sure you check back later today to enter for your chance to win a copy of David Crowder – All This For A King – The Essential Collection.