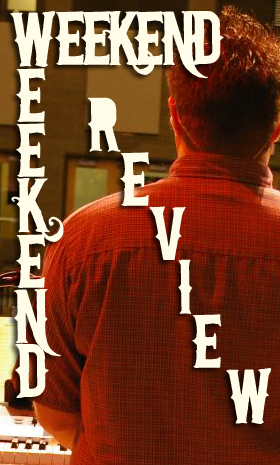 I’m finding that I’m still really struggling with the summer slump. Thankfully, I’ve got a drummer who’s committed to the mission of the church and is willing to play sacrificially and has played for the last 4 weekends. We have some bass players who are willing to play frequently right now, as well as vocalists, but we’re really thin in drummers, acoustic guitarists and electric guitarists.

We did the song “Happy Day” written by Cantelon/Hughes. We didn’t have an electric guitarist, so I had to revise the lead part on the keyboard, using a distorted wurli patch, that actually sounded pretty decent. We only had drums, bass & acoustic though, so there were times when it was hard to be driving the song very powerfully.

After that we did announcements & prayer for our Nicaragua missions team, then went into a three song set that started with Wherever He leads – a hymn with music that I wrote, Nothing by the Blood (not the hymn) and Jesus Paid it All – the passion arr.

We were talking about baptism, so I was focusing on songs that dealt with Jesus blood and the washing aspect of redemption. We had one of our female vocalists lead a song in this set, there was one point on Sunday where she got a little off and the band had a hard time finding how to get back on track with her. Part of that was my fault because I was trying to follow her – which is what you do when you’re accompanying someone with the piano – but I don’t think is the right thing to do when you have a band. Instead of having a vocalist sound off, we had a vocalist sound off and the band got off as well.

Our senior pastor closed the service again – which was great. On Saturday, we had a sound/feedback problem, but we took care of that for Sunday. However, the response was great both on Saturday & Sunday regardless of technical errors.